Get fresh music recommendations delivered to your inbox every Friday.

At Your Convenience: Part 3

from At Your Convenience: A Lavatorial Walking Tour by Loo Tours 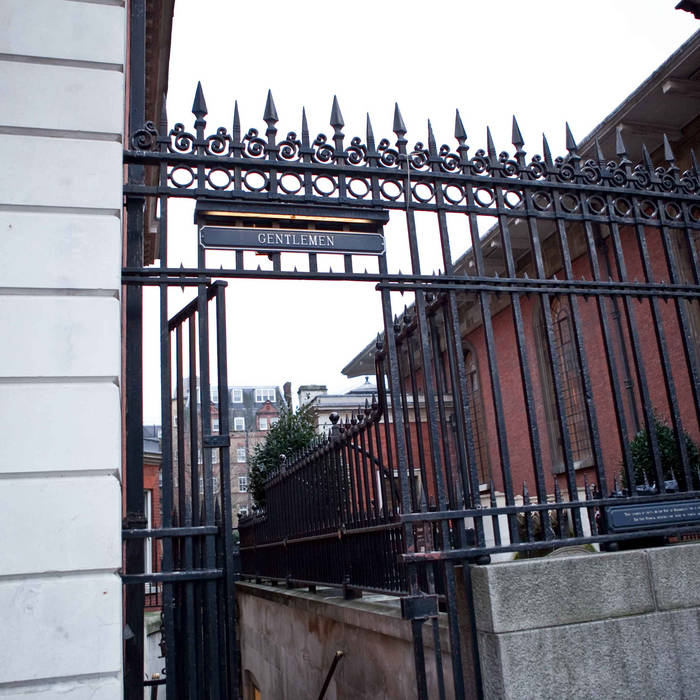 Plunge yourself into the surprisingly dynamic world of the British Public Toilet. This tour takes you past some of London's most iconic views with a new twist.

Turn left into Covent Garden. Find the portico next to St. Paul’s Church. You’ll see Ladies toilets on the right and Gentlemen on the Left.

Jennings petitioned to be allowed build underground toilets similar to these as early as 1958. He wrote a letter:

“Gentlemen, I observe in 'The Times' that certain matters of a Sanitary character have been referred to your Engineer.

“I think it only right to call attention to the efforts I have made to prevent the defilement of our thoroughfares and to remove those Plague spots that are offensive to the eye, and a reproach to the Metropolis.

“Having provided, and fixed the Sanitary appliances at the Exhibition of 1851 and the Dublin Exhibition of 1852, and also those in the present Crystal Palace, I can bear testimony to the Public application of conveniences, suited to the advanced stage of civilization.

“I know the subject is a peculiar one, and very difficult to handle, but no false delicacy ought to prevent immediate attention being given to matters effecting the health, and comfort, of the thousands who daily throng the thoroughfares of your City.”

He went on to describe his plans for underground conveniences and finished:

“If you consider my arrangements bear the stamp of common sense, I offer through you to supply and fix in any part of the City every Sanitary appliance shown in my drawings free of any charge.

“If the cost of Gas-lights Water Supply and respectable Attendants capable of understanding and answering a question, should be considered an expense too great to be encountered, I am willing to take every expense on myself, and carry out every detail, under your Engineer's direction, provided the attendants I furnish are allowed to receive a small gratuity for use of Towels &c. as at the Crystal Palace.

“If this (which many would turn a speculation) should prove commercially valuable, I shall be quite ready at any time to resign my trust, or retain it, using the proceeds for the establishment of similar conveniences.

“I have the honour to be My Lord & Gentlemen,
Your obedient Servant,
George Jennings”

In fact it wasn’t until two years after Jenning’s death that these underground toilets finally caught on. They fit Victorian sensibilities of decency and discretion, often being located in the middle of roads.

These ones now cost 50p as we are still in Westminster… but they are open 24 hours so you know you'll always have somewhere to go!

Turn away from these toilets now. Head through the covered market area all the way out the other side.

The first underground toilets, like the ones we have just seen, were installed in Bank Station near the Royal Exchange in the City of London. Jonathan Routh printed a poem reportedly written to commemorate their opening:

"I'front the Royal Exchange and Underground,
Down Gleaming walls of porc'lain flows the sluice
That out of sight decants the Kidney Juice,
Thus pleasuring those Gents for miles around,
Who, crying for relief, once piped the sound,
Of wind in alley-ways. All hail this news!
And let the joyous shuffling queues
For Gentlemanly Jennings' most well found
Construction, wherein a penny ope's the gate
To Heav'n's mercy and Sanitary wares
Received the Gush with seemingly, cool obedience,
Enthroning Queen Hygeia in blessed state
On Crapper's Rocket: with rapturous ease men's cares
Shall flow away when seated at convenience!"

As you come out of the market you’ll pass a stall selling hats, scarves and socks. This is one of my most regular shopping places… the signature striped stockings of the Loo Lady all came from here! Since I believe toilets should be clean, classy and even fun places I always try to reflect that in my style.

Walk down Tavistock Court by the London Transport Museum. Don’t worry… it’s nothing so narrow as Brydges Place.

You’ll see Covent Garden’s accessible toilets here on your right. They require a radar key. The radar key scheme started in 1981 so that people with disabilities could "go in peace, and quickly, without the indignity of asking someone if they can have a wee, please.”

Today in the UK there are approximately 9,000 toilet doors listed as being RADAR accessible including public toilets and those in private businesses. RADAR stands for the Royal Association of Disability and Rehabilitation.

Stop here in the alley.

“Why are the disabled toilets kept locked? you might wonder. They are large and private spaces which lend themselves to a number of activities other than their intended use.

[Sam] “Fundamentally, toilets are spaces in which privacy is blurred, and the tension between public and private space is highlighted. The Victorians, who paved the way in terms of sanitation constructed the first public loos, and many of their inherent fears transpire in our familiar toilet architecture. The location of loos was often such that facilities were sited in the middle of roads or underground, positioned so that Gentlemen, and later Ladies, were unable to see each other entering, thus conserving modesty, but also building a wall of silence between users. Even today we generally try to avoid contact or even notice the existence of others in the bathroom, although perhaps a display of British prudery this does have its used for those seeking to engage in deviant behavior, and in some instances toilets become the only space in which these off-bound activities can occur. Think back to when you were at school. Did you ever sneak off to the bathroom for a cheeky cigarette? It is exactly this kind of deviant behavior we’re talking about. Toilet spaces offer opportunities like this because they offer freedom from observation, and so they are perfect deviant spaces."

Cross the street and turn left. We’ll hear more from Sam on the other side.

Follow the curve of the road around Burleigh Street.

[Sam] "Perhaps the first to write about deviant behavior was the grandfather of toilet academia Alexandra Kira. In his raunchy 1976 study “The Bathroom” he discusses and photographs the uses of the loo from everyday expulsion of waste, to using the loo to hide from responsibility (mainly work), drugs and sex… which some might say is all of the best things in life in one book!"

Turn Left onto Exeter street. The curb here is quite steep, so take care stepping down as you cross.

[Sam] “Of course, ‘off bound spaces’ occur all over the city and often extend further than the toilet door, but intermediate spaces, like these back alleys, have also enabled deviant toilet behavior. During the 1960’s when one had to be covert, these streets would have been the perfect arena to cruise, eyeing up by passers as potential partners, and if successful, quickly darting back for a jolly in the near by loos. This act was known as cottaging in Britain, and ‘Tea Rooms” in the US. This area, the Stand, is very much a transitory space, based on movement, with heavy footfall and an abundance of hotels thoroughfares and back alleys it is architecturally a non-space, and a prime location for cruising.”

[Sam] “In fact cottaging not only provide interesting anecdotes of deviant behavior in off-bounds spaces, but also helped in the revolution and liberation of sex and sexual minorities.

“Once again, like many deviant activates sex in toilets, particularly same sex, thrived in these off bound space which for many provided the ability to ’step out of the public eye’. This was especially important prior to1967 when being gay was still illegal.”

Pause under the colonnade of the Lyceum Theatre.

[Sam] “In this period deviant toilet behavior actually enabled gay men to create gay spaces and form communities hidden from the view of an unsympathetic society. Now, however, cottaging is often seen as a somewhat bizarre aging and even nostalgic fetish… a gay subculture rather than the means for gay men to get their socks off.

“So I’ll leave you with this thought: Although some of the more menial deviances may ‘piss off’ genuine toilet users, they allow us to find common ground in discussion about our toilet activities. They provide us with anecdotes and histories that are slightly more appealing than the tales of personal toilet habits and genuine uses. They provide a framework for self expression, exploration and identification for both mainstram and countercultures, and that surely has to be a good thing.”

Look to down the street to your left. See that glass structure just across the bicycle path? That is our final destination. Start walking towards it.

This was once the most infamous gents in theatre land! This former toilet alleges to have been the former haunt of the likes of Oscar Wilde, Jo Orton and John Guilgud… and other male theatricals who would come cruising. Wilde carried on his affair with Lord Alfred Douglas not too far away in the Savoy hotel. He was later tried and prosecuted for “Gross Indecency.” Guilgud’s career came to a temporary standstill in 1953 when he was arrested in a Kensington toilet.

This space now plays host to a different sort of deviant activity, and is one of London’s most unusual Cocktail and Cabaret bars. It was converted in 2006, leading the trend of making use of these underground spaces.

In addition to being in a former toilet this bar has amazing toilets of its own. The doors are completely clear, until you lock them, at which point they frost over. One of the great joys in life is watching people who don’t know what they are in for heading back to the toilets and looking in horror at the doors.

Toilets have changed dramatically over the past century, and are likely to continue to do so. They come and go and turn into other things moving with cultural attitudes, priorities and taboos. But no matter what the era they always have and always will contain fascinating stories for those brave enough to lift the lid.

This is where I leave you for today.

If you want to get back to where we started cross Waterloo Bridge back to the Royal Festival Hall. Or stay and have a cocktail in the Cellar Door. It’s well worth the experience! And don’t forget to visit the loos… whether you need it or not!

I hope you have enjoyed the tour.

You can find out more about this and other Loo Tours projects at lootours.com or on twitter @londonlootours.

Our theme was composed by Paul Freeman and played by Julie Groves and Nadia Wilson.

We would like to thank the many generous backers who gave their support to make this project happen. Particular thanks to:

And, of course, thanks to our sponsors Thomas Crapper and Company.

Bandcamp Daily  your guide to the world of Bandcamp